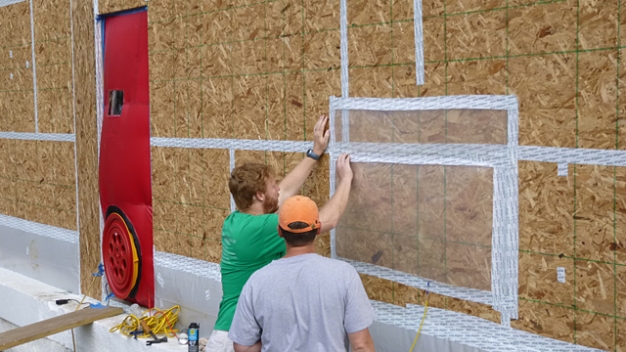 OSB as an Air Barrier

Building codes are getting tougher about airtightness. In the 2012 International Energy Efficiency Code (IEEC), blower-door testing is required for new homes, and the limits have gotten stricter. While the 2009 code specified 7 ACH50 (7 air changes per hour at 50 pascals of pressure), the 2012 code calls for 5 ACH50 for southern homes and 3 ACH50 for homes in the northern U.S.

Many builders will have to change their ways to meet the 2012 code’s requirements. But code-compliant airtightness is a piece of cake compared with the stringent specification for the voluntary Passive House standard. Passive House allows no more than 0.6 ACH50—five to eight times tighter than the 2012 code. These days, Passive House builders are routinely meeting that standard. But nobody is saying that it’s easy.

One popular approach among the Passive House crowd is to rely on OSB sheathing, taped at the seams, as the air barrier (or “air control layer”) for the house. That’s the method architect Richard Pedranti chose for his first Passive House, in 2014 in Scranton, Pa. But to his dismay, Pedranti’s house failed its first blower-door test. The reason? Under 50 pascals of pressure, the OSB leaked air—not at the taped seams, but all across the faces of the panels.

Pedranti’s wall assembly was a 2×4 frame with taped OSB sheathing and wood I-joists applied over the outside face of the wall to create a 12-inch cavity for dense-blown cellulose insulation. The outside face of the I-joist wall was to be sheathed with vapor-open particleboard, then double-strapped for siding—essentially, the same wall system described in JLC by Maine Passive House builder Chris Corson (“An Affordable Passive House,” May/12 and Jun/12).

“We never questioned using OSB as our vapor and airtight layer,” Pedranti told JLC. “The industry accepted it.” But with walls and roof framed and sheathed (but no I-joist layer yet), the building tested at 1.5 ACH50. “We spent hours and hours chasing leaks,” said Pedranti, “but at the end of the day we were still at 1.1 ACH50.” Then Pedranti’s HERS rater, Pete Vargo, suggested reversing the blower-door fan, pressurizing the building, and taking a look at the outside. When the crew taped plastic over the OSB walls, Vargo’s suspicions were confirmed: Air was leaking through the OSB.

Pedranti was demoralized and discouraged. “What was I going to do?” he said. “We didn’t have anything close to a Passive House. I was feeling queasy.” But reaching out to experienced colleagues helped. Passive House builders Adam Cohen, Dan Whitmore, and Chris Corson offered sympathy and advice, as did Passive House Institute US (PHIUS) co-director Mike Kernagis. Based on their input, Pedranti weighed his options for sealing up the OSB. 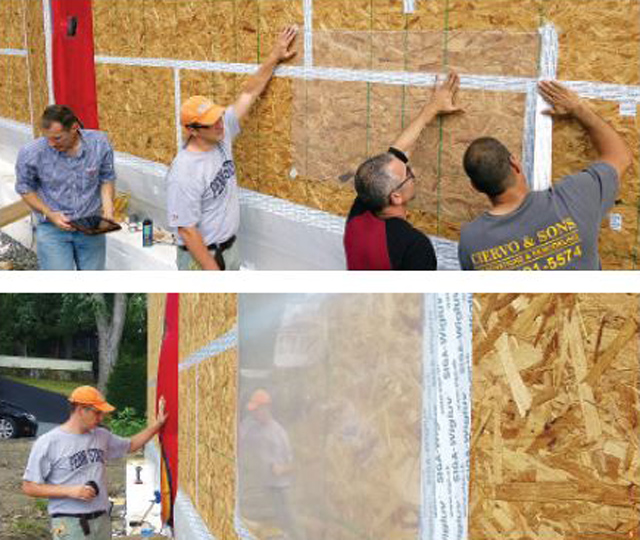 Pedranti was lucky to identify the problem before burying the OSB inside the multi-layered wall assembly. Now, he realized, he had a range of choices for making the wall airtight. He considered several fluid-applied membranes, including Dow Corning Defendair 200, BASF Enershield, and Prosoco Cat-5—all costly, but all known to be effective at air-sealing. “Prosoco is very expensive,” said Pedranti. “The othertwo wouldn’t warranty their product for residential use. I couldn’t go there—I was working for somebody else. I couldn’t use a product if the manufacturer wouldn’t stand behind it.”

Also, Pedranti noted, he had already air-sealed the OSB joints with Siga Wigluv tape, which has a water-based adhesive. Solvents in the fluid membranes might attack the tape. So Pedranti decided to apply another Siga product to his building: Siga Majpell air-barrier fabric, sealed at the joints with Siga Majvest double-sided tape.

The fix cost more than $3,000, said Pedranti (“the tape is good, but it’s expensive,” he said). But it took just a few hours—and with a layer of Majpell over the OSB, the house was tighter than 0.3 ACH50.

Pedranti learned his lesson. He has just tested his second Passive House project—another simple box, but this time sheathed with Zip System coated OSB. “I can’t tell you the number,” Pedranti said. “It’s so tight, I’m afraid it might be wrong. It’s ridiculously low. I’m going to have my HERS rater check it before I tell anyone.” 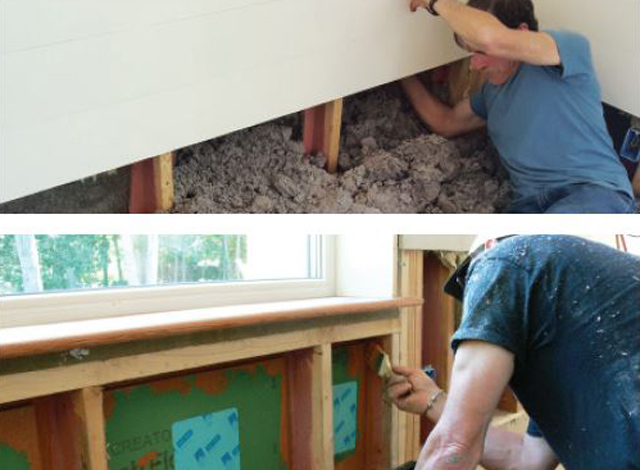 A WET MORNING IN MAINE

Since Maine builder Chris Corson helped Pedranti solve his Pennsylvania problem, Corson has had his own encounter with leaky OSB—in Corson’s case, for a Passive House in Camden, Maine. Corson has built dozens of Passive Houses since 2012, panelizing his 2×4 stud and I-joist walls in a warehouse near Belfast, Maine. Corson has been comfortable with an OSB air barrier despite Pedranti’s experience, and despite research showing wide variation in OSB air permeability. And until recently, Corson’s field experience confirmed his confidence, with house after house handily beating Passive House criteria.

But in December, Corson’s crew had the same experience Pedranti described. “We tested the house and got like 0.7 ACH50,” Corson told JLC. “I said, ‘What’s going on?’ And after running around chasing leaks all day, I said, ‘Let’s look at the OSB.’ We taped plastic over the wall and cranked the blower door up to 150 pascals, and sure enough, the air was coming right through the OSB.”

Corson’s solution was to coat the inside face of the OSB sheathing between the wall studs with a fluid-applied Prosoco flashing membrane (the outside face of the OSB was already buried under I-joists and cellulose). After that, he told JLC, the house tested out at 0.28 ACH50. And like Pedranti, Corson made the decision to switch to using Zip System sheathing for his air barrier. “For [an extra] $600, it solves the problem,” he said. “It’s a no-brainer.”

But there’s a footnote to Corson’s story. After the Camden house was dried in and sided, he handed the job off to the homeowners for painting and interior trim. In June, three weeks before their move-in date, the owners finished a day’s work on trim, locked up the house, and went home. When they came back the next morning, they couldn’t open the door—because the inside of the house was flooded with 2 feet of water. A fitting on the main water supply had burst. None of the water had leaked out—the house was watertight as well as airtight. Through the glass door, said Corson, “They could see their tools floating around in there. It was like an aquarium.”

Ironically, said Corson, the field-expedient fix to the leaky OSB air-control layer “saved the house” when the flood occurred. “This could have been a complete and total tragedy,” he said. Unprotected by the waterproof membrane, “that OSB could have wicked the water all the way up the whole first floor as if you had 8 feet of water in there.” As it was, he said, the flood fix was simple. “I took my guys off other jobs and we came in and fixed it,” he said. “It was a little painful—it was all plastered and painted. We cut 55 holes in the sheathing, pulled out all the wet insulation, dried the walls out, re-insulated, patched it all up, and sealed it.” The polished concrete slab floor was undamaged.